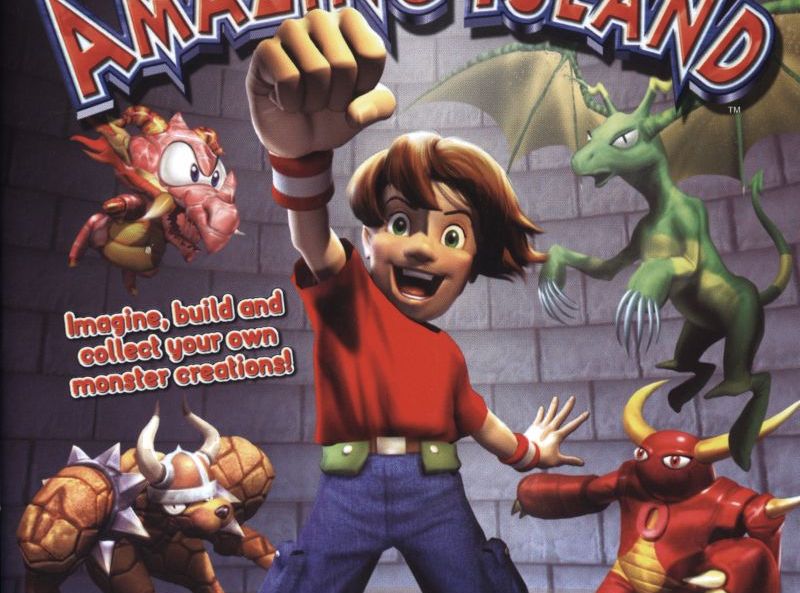 Amazing Island is a game I have fond memories of. I was never the most popular kid in school, in fact I was often a frequent target for bullying. So naturally video games became an escape for me, much to the detriment of my social skills for many years to come. I did have a couple of friends with subscriptions to Nintendo Power though, and they often showed me games that I might have otherwise missed. Sure, you had the bigger titles like Animal Crossing and Pokemon Colosseum (which I still haven’t played and don’t have a copy of), but every so often they’d make mention of something different. And while I don’t remember how my friends came to find this game, I remember a photoset in either Nintendo Power or Game Informer that showed three monsters, though I only remember two: One being Charlie Brown with the caption “what a blockhead” and the other being South Park’s own Cartman with the caption “hey you guys, I’m seriously!” It was a different time for game journalism.

The premise of Amazing Island is that you, an 11-year old boy or girl (who does not resemble the child on the North American box art in the slightest beyond wearing a similar outfit), find a picture book with a card in it, and hear a faint call for help in the night. Upon opening the book, you are transported to the titular Amazing Island and asked to purge the influence of a being known as Black Evil by collecting Vision Orbs from across the island. But to do so, you need to create a monster!

Monster creation is at the heart of Amazing Island’s gameplay. Monsters are required to play through the challenge courses of the island, and at the Hall of Life, you can create whatever comes to mind with the tools available. You first monster will be made for you with input from a series of five questions, but once it’s brought to life, you can customize it as you like, and you can even come back to redo the accessories, voice, eyes, and colors as you unlock more options. Each created monster will also net you a chance star, allowing you to retry a game on any of the courses up to a maximum of 99 times. Even if you don’t save your monster after making it, you can still keep the chance stars if you save your game. I made two that I didn’t save: Don Pinchion (pictured above in progress, I ran out of space to call him Don Pinchioni), and a monster with a dog frame that I simply called “Bubba”.

So now that your monster is made, you have access to the various courses around the island! At first you’ll only have access to the beginner course and the four minigames along it, but as you progress in the game, you’ll unlock the intermediate and advanced courses, each with an additional minigame and a branching path.

That’s about the extent of gameplay, really. Make a monster, attempt one of the challenge courses and claim the eight vision orbs along the way before you take on Black Evil itself. It’s simple, but it’s got a lot of charm and polish, and you’ll earn rewards based on your performance. For 700 – 999 points on any of the minigames, you’ll earn a bronze chest with a potion inside. For 1000 – 1699 points, you’ll earn a silver chest with an accessory, and for anything above 1700 points, you’ll receive a gold chest with a premade monster card in it that you can use if you’d like.

But what really makes Amazing Island stick out in my mind is a fun little mode you can activate after completing the game: Pig Mode.

Pig Mode is exactly what it says on the tin. Boulders are replaced with pigs, races will have a pig flanking you on each side rocketing ahead the moment the race starts, and the water-skipping minigames will have pigs that spin in place and hop and squeal as you pass them.

It’s such a silly addition, but just seeing pigs in places they wouldn’t otherwise be has always made me laugh.

So while this piece is most likely shorter than the others, I’m going to give Amazing Island a hearty recommendation. Aside from the main adventure, there’s also a multiplayer mode where you can challenge up to three friends in minigames, or connect a GBA and play Monster Cards for more accessories. Sadly, I don’t currently have a way to record said mode, but if I did I would be all over it.

And if you’re on the fence still? I’m just going to repeat myself: pig mode.