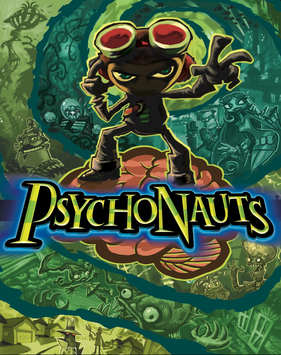 Platforms: Windows, Xbox, PlayStation 2, Mac OS, Linux, PlayStation 4 digital download, probably more if I had to guess, those are just the ones I was able to find.

I didn’t hear about Psychonauts until I started watching through the backlog of Zero Punctuation years and years ago. Yahtzee sang praises of the game for so many different reasons, and it got stuck in my head for a while as a result. Of course, I didn’t end up playing Psychonauts until I was in college when I saw it on Steam. It took a bit to get over the art style at first, but once I did that I was in love almost immediately. The music was great, the characters were well-written, and the controls were just so tight, especially by modern standards. I can just pick up Psychonauts, turn off the inverted vertical camera controls, and go.

For those unfamiliar with the game, Psychonauts puts you in control of a young circus runaway named Razputin, Raz for short. Raz breaks into a summer camp for psychic children called Whispering Rock, and over the course of the next day or so he’ll learn to harness his latent psychic abilities. I’m talking telekinesis, levitation, and clairvoyance just to name a few. It’s wild, but it let me act out my childhood fantasy of being able to move things with my mind. You know, like a Jedi!

Once again, the story is something I’m going to set off to the side because this is definitely one of those games I want you to experience with as little foreknowledge as possible. So instead I want to talk about how every aspect of this game is wonderful, especially now that I’m older and a little more familiar with game design.

At its core, Psychonauts is a platformer. You move around, jump, and navigate the environment by climbing, swinging, and more. There are secrets everywhere. Scavenger hunt items, PSI challenge markers that you can use to increase your PSI Cadet rank, and PSI cards that you can use to rebuild old challenge markers that have fallen apart. And that’s just around camp! In the mental world, there are figments to collect, mental cobwebs to clear, vaults to unlock, and emotional baggage to sort out. That’s literal, by the way. You have to sort literal baggage.

Sort all of it out and you’ll unlock primal memories, which is a fancy in-universe way to refer to the concept art of the game. But all of it raises your PSI Cadet rank and unlocks new equipment for purchase as well as new powers like invisibility. You’ll need to be rank 20 to finish the game, but past that most everything is optional, or at least makes your job that much easier. There’s a lot to do, but I’ve enjoyed every moment of it time and again. The game is just rife with charm and I think a lot of it has to do with Raz’s character design. He’s psychic, yes, but he’s also a circus acrobat from birth, so every part of his animations plays into that. He climbs ladders by grabbing the sides and scrambling up quickly, he’s got the dexterity to swing from bars and even flips when he takes off, and he can walk a tightrope with little to no problem. Raz is awesome, and what’s even better is that he’s voiced by Richard Horvitz. You know, Invader Zim.

I’m not sure what else I can really say to explain just how much I love Psychonauts. It’s a fantastic game and it still looks amazing due in no small part to the choice of aesthetic. I’d go so far as to say it’s one of my all-time favorites, and that’s no small praise considering the size of my backlog. You owe it to yourself to play Psychonauts if you have access to one of the consoles listed above, or wherever else you can find it.

Seriously, I cannot give this game enough praise. If I had a diamond variant of my seal of approval I would use it. Go play Psychonauts! It’s $10 on Steam, and probably comparable on other digital storefronts. Now if you’ll excuse me I’m going to get prepped to play Psychonauts 2 at long last.